With artificial intelligence seemingly affecting everything it touches, one might wonder what AI’s impact will be on the employment picture in the years ahead.

It’s something that AI expert and author Kai-Fu Lee has thought about in depth. Lee is the former president of Google China and the author of the best-selling book AI Superpowers:  China, Silicon Valley and the New World Order.

Recently, Lee published a column in which he described ten job categories that he feels are “safe” for human workers – regardless of how the AI world may develop around us.

His list is predicated on several fundamental weaknesses Lee sees with AI in handling certain aspects of job performance. Those weaknesses include:

In short, Lee discerns a particular weakness in AI’s ability to perform “humanistic” tasks – ones that are personal, creative and compassionate.  Hence, the type of jobs that rely on such qualities will be safer from disruption, he believes.

As for career categories that Lee singles out as generally safe from AI disruption, he cites these ten in particular:

Computer Science – Lee predicts that a substantial portion of computer engineers, IT administrators and technology consultants will continue operate in job functions that aren’t automated by technology.

Criminal Law – The legal profession won’t be adversely affected, considering the persuasive powers that are needed to sway juries with legal arguments.  However, some paralegal tasks such as document review will likely migrate to AI applications.

Management – Simply put, there are too many “moving parts” to management – and aspects that require human interaction, values and decision-making – to make it a field that’s amenable to AI.  Of course, if a manager is more along the lines of a bureaucrat carrying out set orders, that type of job may be more susceptible to AI disruption.

Medical Care – Lee envisions a symbiotic relationship between humans and AI — the latter of which can help with the analytical and administrative aspects of healthcare but cannot handle most other healthcare responsibilities.

Physical Therapy – Dexterity is a challenge for AI, which makes it unlikely for AI to replace jobs in this field (also including massage therapy).

Psychiatry – Positions in this category, which encompass social work and marriage counseling in addition to strict psychiatry, require keen emotional intelligence which is the domain of humans.

R&D (particularly in AI-related field) – While some entry-level R&D positions will become automated, increased demand for R&D talent will likely outnumber the jobs replaced by AI.

Science – According to Lee, while AI will be of tremendous benefit to scientists in terms of testing hypotheses, it will be an amplification of the discipline rather than taking the place of human creativity in the sciences.

Teaching – While AI will be a valuable tool for teachers and schools, instruction will still be oriented around helping students figure out their interests and providing mentorship – qualities that AI lacks.

Writing – Specifically fiction and other creative writing, because “storytelling” is an aspect of writing that AI has difficulty emulating.

So, there you have it – Kai-Fu-Lee’s fearless predictions about the job categories that will remain safe in an increasingly AI world. Can you think of some other categories?  Please share your thoughts and perspectives with other readers.

I’ve blogged before about how the American public doesn’t seem to be responding to the news that the country has been out of its economic recession for a number of years now.

It’s not for lack of trying.  From the White House and other politicians to government agencies, financial industry practitioners and news media articles, there’s been a steady stream of speeches, announcements, news items and commentary lamenting the disconnect between the perception and the reality.

Plus … I’m reminded often by my business counterparts who work in Europe and Asia that the situation is much better in America than in many other countries.  I consider it advice to “count our blessings,” as it were.

With this as backdrop, it’s easy to fall into the paradigm of thinking that the American public is simply being unrealistic in its expectations for economic recovery — and the recovery’s ability to reach into all strata of society.

But then … along comes a commentary by Jim Clifton, chairman and CEO of the Gallup polling organization.

In addition to heading what is arguably America’s most famous polling company, Mr. Clifton is a keen observer of economics and public policy.  He is also the author of the book The Coming Jobs War (published in 2011).

The gist of Clifton’s commentary is that the official unemployment rate, as reported by the U.S. Department of Labor, is very misleading.

Moreover, it’s Clifton’s contention that the very way the Department of Labor calculates the unemployment rate goes straight to the heart of the disconnect between the experts and the “person on the street.”

Here’s what Clifton wrote in a column released earlier this month:

“If a family member or anyone is unemployed and has subsequently given up on finding a job — if you are so hopelessly out of work that you’ve stopped looking [for work] over the past four weeks — the Department of Labor doesn’t count you as unemployed.

That’s right:  While you are as unemployed as one could possibly be, and tragically may never find work again, you are not counted in the [unemployment] figure we see relentlessly in the news — currently 5.6%.”

In Clifton’s estimation, right now as many as 30 million Americas are either out of work or severely unemployed.  That would equate to an unemployment rate far higher than the reputed 5.6% figure.

But it goes even beyond that.  Clifton points out another clue as to why the perception gulf between the “statisticians” and the “street” seems so wide — and he puts it in the form of two examples:

“Say you’re an out-of-work engineer or healthcare worker or construction worker or retail manager.  If you perform a minimum of one hour of work in a week and are paid at least $20 — maybe someone pays you to mow their lawn — you’re not officially counted as unemployed in the much-reported 5.6% [figure].

Yet another figure of importance that doesn’t get much press:  those working part time but wanting full-time work.  If you have a degree in chemistry or math and are working 10 hours part time because it is all you can find — in other words, you are severely unemployed — the government doesn’t count you in the 5.6%.

Clifton doesn’t mince words in his characterization of the official unemployment rate; he calls it a “Big Lie” — one which has consequences that go well-beyond simply the stats being arguably wrong.

Here’s how he puts it:

“… It’s a lie that has consequences because the Great American Dream is to have a good job — and in recent years, America has failed to deliver that dream more than it has in any other time in recent memory.

A good job is an individual’s primary identity — their very self-worth, their dignity.  It establishes the relationship they have with their friends, community and country.  When we fail to deliver a good job that fits a citizen’s talents, training and experience, we are failing the American Dream.”

Statisticians and economic policy experts can and do disagree about what constitutes a “good job” in America.  The Gallup organization defines it as working 30 or more hours per week for an organization that provides a regular paycheck, with or without other benefits.

That’s actually a pretty low-bar for what defines a “good job.”  But however jobs are defined, the U.S. economy is currently delivering at a rate of just 44%, which equates to the number of full-time jobs as a percent of the adult population (age 18 and over).

It would seem that the 44% figure would need to be significantly higher to really solve the challenge of available jobs.

Clifton concludes his commentary by issuing this challenge:

“I hear all the time that ‘unemployment is greatly reduced, but the people aren’t feeling it.’  When the media, talking heads, the White House and Wall Street start reporting the truth — the percent of Americans in good jobs; jobs that are full time and real — then we will quit wondering why Americans aren’t ‘feeling’ something that doesn’t remotely reflect the reality in their lives.

And we will quit wondering what hollowed out the middle class.”

I’ve devoted significant space in this blog post to quoting Jim Clifton’s words verbatim, so as not to change their tenor or dilute them in any way.

What do you think?  Is Clifton speaking truth to power?  Or is he painting an overly negative view of things?  I welcome your thoughts and comments. 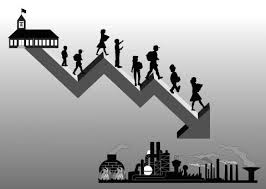 It may seem fanciful, but a new report published last week by The Conference Board concludes that the United States and other advanced economies will actually face significant labor shortages over the coming decade and a half.

This forecast has been made primarily based on the Baby Boomer workforce departing the labor market over this period.

The Baby Boomer phenomenon is what makes things different in now compared to the decades previously:  For the first time since World War II, working age populations will actually be declining in mature markets.

As Dr. Gad Levanon, director of macroeconomics at The Conference Board reported, “The global financial crisis and its aftermath – stubbornly high unemployment in many countries – have postponed the onset of this demographic transformation, but will not prevent it from taking hold.”

According to The Conference Board’s analysis, several countries have already begun to see this happen, as their natural rates of employment have now fallen below their pre-recession levels:  Japan, Germany, South Korea and Canada.

The same thing is expected to happen in the United States and the United Kingdom by 2015 … and in the Scandinavian countries, the Benelux countries plus Australia by 2016 or 2017.

Other mature economies like those of Spain, France, Portugal, Italy and Greece won’t experience this until the years further out – but The Conference Board predicts that it will happen there as well.

U.S. market sectors that are expected to experience the most severe labor shortages include healthcare occupations, STEM occupations (science, technology, engineering and mathematics), as well as skilled trades that don’t require a college degree but that do require specialist training.

Among the challenges The Conference Board envisions in these three major categories are the following:

The Conference Board report has constructed a Labor Shortage Index covering 32 countries.  The index combines current labor-market tightness with future demographic trends to predict the likelihood of the different countries experiencing labor shortages.

The bottom line on the index:  with the exception of the Mediterranean countries, all of the labor markets in developed economies are expected to be squeezed pretty tightly starting within the next few years.

It’s been quite a while since we’ve been hearing about pending labor shortages … but that’s exactly what The Conference Board is predicting.  Here’s a link to more details about the report, which is appropriately titled From Not Enough Jobs to Not Enough Workers.

If you have thoughts or personal observations to share on the job markets on the domestic scene or internationally, please share them with other readers here.