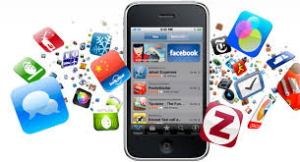 It was bound to happen.

The bulk of time Americans are spending on digital media … is now happening on mobile applications.

According to data released this past week by Internet and digital analytics firm comScore, the combined time that people expend using digital media breaks down as follows:

Apps are clearly in the driver’s seat – particularly in the mobile realm.  In fact, comScore estimates that apps account for 7 out of every 8 minutes spent on mobile devices.

This doesn’t mean that app usage is spread evenly throughout the population of people who are online.  Far from it.  Only about one-third of people download one app per month or more.  (The average smartphone user is downloading about three apps per month.)

The inevitable conclusion:  App usage is highly concentrated among a subset of the population.

Indeed, the 7% most active smartphone owners account for almost half of all the download activity during any given month.

But even if most users aren’t downloading all that many apps … they are certainly engaged with the ones they do have on their devices:  comScore reports that nearly 60% are using apps every day.

Here again, the data show that usage levels are much higher among smartphone users than they are with tablet users (where only about one quarter of the people use apps daily).

Where they’re spending their time is also interesting.  Well over 40% of all app time spent on smartphones is with a user’s single most used app.  (Facebook takes top honors — of course.)

And if you combine social networking, games and Internet radio, you’ve pretty much covered the waterfront when it comes to app usage.

When you think about it, none of this should come as much surprise.  We’re a mobile society – hourly, daily, monthly and yearly.  It only makes sense that most online time is going to be happening when people are away from their home or their desk, now that it’s so easy to be connected so easily from even the tiniest mobile devices.

And speaking of “easy” … is it really any wonder why people would flock to apps?  It’s less hassle to open up an app for news or information rather than searching individual sites via mobile.  People simply don’t have the patience for that anymore.