Skip to content
HomeWhere’s the Best Place to Live without a Car? 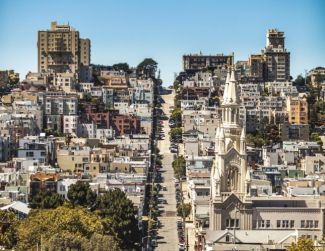 For Americans who live in the suburbs, exurbs or rural areas, being able to live without a car seems like a pipedream. But elsewhere, there are situations where it may actually make some sense.

They may be vastly different in nearly every other way, but small towns and large cities share one trait – being the places where it’s more possible to live without a car.

Of course, within the larger group of small towns and larger cities there can be big differences in relative car-free attractiveness depending on differing factors.

For instance, the small county seat where I live can be walked from one side of town to the other in under 15 minutes. This means that, even if there are places where a sidewalk would be nice to have, it’s theoretically possible to take care of grocery shopping and trips to the pharmacy or the cleaners or the hardware store on foot.

Visiting restaurants, schools, the post office and other government offices is also quite easy as well.

But even slightly bigger towns pose challenges because of distances that are much greater – and there’s usually little in the way of public transport to serve inhabitants who don’t possess cars.

At the other end of the scale, large cities are typically places where it’s possible to move around without the benefit of a car – but some urban areas are more “hospitable” than others based on factors ranging from the strength of the public transit system and neighborhood safety to the climate.

Recently, real estate brokerage firm Redfin took a look at large U.S. cities (those with over 300,000 population) to come up with its listing of the 10 cities it judged the most amenable for living without a car. Redfin compiled rankings to determine which cities have the better composite “walk scores,” “transit scores” and “bike scores.”

Even within the Top 10 there are differences, of course. This chart shows how these cities do relatively better (or worse) in the three categories scored:

Redfin has also analyzed trends in residential construction in urban areas, finding that including parking spaces within residential properties is something that’s beginning to diminish – thereby making the choice of opting out of automobile ownership a more important consideration than in the past.

What about your own experience? Do you know of a particular city or town that’s particularly good in accommodating residents who don’t own cars?  Or just the opposite?  Please share your observations with other readers.