Skip to content
HomeH. Owen Reed at 103: The Dean of American Composers Celebrates a Birthday

The American composer H. Owen Reed celebrates a birthday this week. At 103 years old, he is surely America’s oldest composer “of note” today. And if you ever played a musical instrument and were involved in a concert band ensemble, chances are you’ve performed his highly accessible and engaging music.

Herbert Owen Reed is a product of the American Midwest – born in 1910 and raised in Missouri not far from Kansas City. His family had musical interests; his father was a country fiddler and his mother played the piano.

Young Owen dutifully took lessons in classical piano as was the custom in many a middle-class household in those days. But he was more interested in popular piano ditties than he was in Beethoven or Bach.

Reed was also attracted to swing band music, eventually leading several bands of his own. This early interest would inform aspects of his later career as a classical composer, as some of Reed’s most famous and oft-performed pieces are scored for concert bands.

In 1937, Reed received his Ph.D. in music composition from the Eastman School of Music in Rochester, NY. Among his teachers was the esteemed Howard Hanson, head of the school and a popular composer in his own right.

Other leading musicians with whom Reed was fortunate to study included the composers Aaron Copland and Bohuslav Martinú, and the conductor Leonard Bernstein.

Reed achieved his big break as a composer at a relative early age. In the late 1940s, following an extended study of Mexican folk music in several provinces south of the border, Reed composed a “Mexican Folk Song Symphony for Band” he subtitled La Fiesta Mexicana.

Just a few years later, this piece would receive its first recording by Frederick Fennell and the Eastman Wind Ensemble – and a blockbuster recording it was. 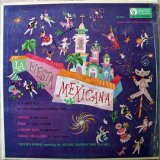 Music lovers were dazzled by the color and inventiveness of the score – as well as the sonic power of the recording — an absolutely incredible audio accomplishment in 1954.

Drawing from a variety of authentic Mexican folk melodies, Reed created a highly substantive three-movement symphony, brimming with freshness and imagination throughout its nearly 30-minute duration.

The work was a major trend-setting accomplishment that sparked interest on the part of other American composers who were inspired to pen their own works for concert band.

It’s not an exaggeration to suggest that La Fiesta Mexicana sparked a whole new genre of “long-form” compositions for wind ensemble.

The 1954 premiere recording of La Fiesta Mexicana would be the first of many made of Reed’s score in the ensuing decades – nearly 30 at last count. Nearly all major American wind ensembles – many of them associated with America’s best university music programs – have seen fit to record the work. Concert bands as far away as Japan have issued recordings.

Several recordings of the symphony have been made by the U.S. armed forces bands as well. This YouTube clip of the third movement of La Fiesta Mexicana, recorded recently by the U.S. Marine Band, delivers all of the energy and freshness inherent in Reed’s score.

[I’ve heard perhaps a half-dozen different recordings of La Fiesta Mexicana. I keep coming back to the original 1954 Fennell version as the one that delivers the best combination of artistic interpretation and audiophile sound. Underscoring that recording’s reputation is the fact that it remains commercially available even today, fully 60 years after it was recorded!]

While Reed’s symphonic band scores are the most famous and popular of his musical output, they are by no means the full extent of Reed’s creative energies. He has also composed operas, chamber and instrumental music, and works scored for symphony orchestra (including a youthful symphony).

Reed’s long musical career is also distinguished by the fact that he was on the faculty of Michigan State University for nearly 40 years – from 1939 until his retirement in 1976 (and since then as a distinguished professor emeritus). Many of Reed’s own students have gone on to become well-known composers in their own right. And he is the recipient of numerous honors and awards, including a Guggenheim Fellowship for Creative Work in Musical Composition.

Reed’s appreciation of the musical legacy of the cultures of the Americas has been an abiding interest over the decades. In addition to his music research in Mexico in the late 1940s and again the early 1960s, he has studied the folk music traditions of the Caribbean Basin, as well as the Native American music of Arizona and New Mexico.

At age 103, H. Owen Reed is surely a link to America’s musical past. Yet he is also a man of today who retains a keen interest in “all things musical.” I found this YouTube clip of Reed at age 102, performing the popular American standard Misty, particularly endearing.

So here’s a hearty toast to H. Owen Reed, the Dean of American composers, on the occasion of his 103rd birthday.  Well done, master!

One thought on “H. Owen Reed at 103: The Dean of American Composers Celebrates a Birthday”