Skip to content
HomeSaints and Sinners: The Ten Most Sinful Cities in the United States … and the most Saintly

Which cities in America are the “most sinful” of the bunch? Perhaps they’re the ones whose monikers or mottos seem to suggest as much:

While some of the descriptions above hardly represent what city boosters would want to convey about their burgs, a surprising number of them are actually the end-result of formal marketing and branding efforts – focus-group tested and all.

[How many cities do you think you can name for these slogans?]

But put all of that aside now … because the online residential real estate website Trulia has been busy doing its own analysis of which cities qualify as being among the nation’s most “sinful.” Earlier this month, it published its listing of the ten most “sinful cities” in the United States.

How did Trulia compile the list? For starters, it limited its research to the 150 largest metropolitan areas.

Next, it used a variety of data such as drinking habits, the number of adult entertainment venues and the number of gambling establishments to determine the cities where it’s easiest to succumb to the eight deadly sins – among them gluttony, greed, lust, sloth and vanity.

For each “offense,” Trulia examined statistical measures that serve as key clues – stats like how many adult entertainment venues there are (for lust), and exercise statistics (for sloth).

Obviously, a mega-city like New York or Los Angeles is going to offer many more outlets catering to the sinful nature of mankind compared to smaller urban centers. So Tulia has “common-sized” the data based on per capita population, making it possible to determine the destination in which it’s easiest to satisfy one’s whims (or vices).

So – drumroll please – here’s the resulting Trulia Top Ten, listed below beginning with #10 and moving up to the ignominious honor of being the most sinful city of the bunch:

I suppose few people would quarrel with New Orleans coming in at #1 on the list; anyone who has spent any time in that city knows must know how much of an “anything goes” atmosphere exists there. (Few tourists seem to avert their eyes to what they see, either.)

But what about Louisville, or Toledo, or … Shreveport?? OMG!

Of course, the same statistics Trulia crunched to determine who sits atop the “Sin City” list also reveal which cities are their polar opposites – the places Trulia calls America’s “saintly sanctuaries.” 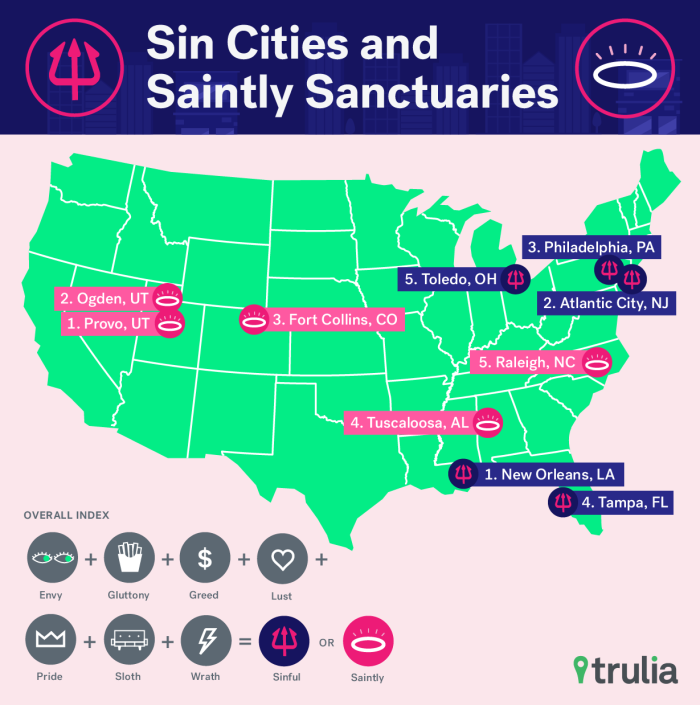 For details on the Trulia analysis and to read more about the methodology employed, click here.

What’s your take? Based on your own personal observations or even first-hand experience, which cities would you characterize as the most “sinful” … and the most “saintly”?  We’re all interested to know!

4 thoughts on “Saints and Sinners: The Ten Most Sinful Cities in the United States … and the most Saintly”