If you suspect that Americans are increasingly getting their news from someplace other than the standard TV/cable, print and online news outlets, you’re right on the money.

In fact, research conducted by the Pew Center in association with the Knight Foundation during 2015 reveals that the share of people for whom Facebook and Twitter serve as a source of news is continuing to rise.

More specifically, nearly two thirds of the 2,000+ Americans age 18 and older surveyed by Pew (~63%) reported that they’re getting news reporting from Facebook.

A similar percentage reported receiving news from Twitter as well.

Although both of these social networks now have the same portion of people getting news from these two sources, the Pew research discovered some nuanced differences as to their strengths. 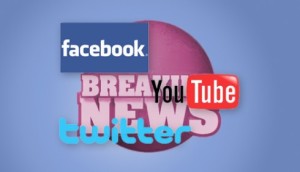 A far bigger portion of people follow “breaking news” on Twitter compared to Facebook (~59% versus ~31%), which underscores Twitter’s strength in providing immediate “as-it-happens” coverage and commentary on live events.

Seeing such behaviors, it shouldn’t come as any surprise that both social networks have been implementing more initiatives that strengthen their positions as news sources even more:

According to Pew, news exposure is on social media roughly equal among all demographic factors including gender, ethnicity and income. The one exception, of course, is age.

All of these developments underscore the fact that the “traditional” TV, print and online outlets are no longer dominant when it comes to news consumption. And it’s highly unlikely that the trend will ever be reversed, either.

One thought on “For many people, what’s “breaking news” isn’t breaking on traditional news media outlets.”