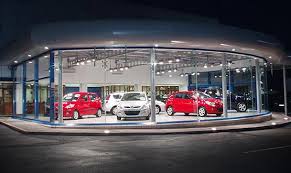 A new milestone is set to be reached in 2014.  For the first time, digital advertising will represent over half of all ad spending in the U.S. automotive sector.

That means that TV, radio, outdoor, newspaper and other print advertising, taken together, will represent only a minority of the roughly $36 billion advertising industry, the second largest advertising category in the United States (behind general merchandise stores).

This is great news for all of us who have suffered through high-decibel radio advertising, TV ads with sophomoric production values, and “carnival barking” poster-like print ads that have been so ubiquitous in the automotive category for so many decades.

A just-released report from media research company Borrell Associates, titled 2014-2015 Automotive Advertising Outlook, notes the following key factors that have influenced the “drive towards digital” in the automotive advertising category:

•     Over the past decade, the number of franchise auto dealers has dropped by ~3,500 (18%), even as the number of new vehicles sold per dealer has grown by ~18%. Fewer-and-larger dealerships reduce marketplace clutter and the clamor for audience attention.

•     Also contributing to reduced clutter, six major car brands have disappeared from the market over the past 10 years: Hummer, Mercury, Plymouth, Pontiac, Oldsmobile and Saturn.

•     More than 90% of auto purchases begin with consumer online research. This change in behavior has transformed auto dealerships from acting like showrooms to being more like fulfillment centers.

•     As their “media channel,” dealerships are able to use the Internet to offer special customer deals in the form of rebates, incentives and loyalty programs. These marketing schemes now amount to ~$2,400 per vehicle sold — dwarfing the amount spent on advertising.

Thanks to these major trends and developments, we’re now spared the volume and intensity of intrusive automotive advertising that was so common before.

Instead, car dealerships are ready and waiting for us when we’re in the market to purchase a new automobile by using online ads, search engine marketing, social media and other digital platforms to be easily accessible and available when we go online.

Five years ago, online ad spending was about one third the amount of traditional advertising.

The information-rich web is also changing another aspect of the car buying experience:  It’s making the job of automotive sales easier rather than more difficult.

Here’s proof:  Only a few years ago, more than half of all car shoppers would end up not buying a vehicle.  Today, that proportion has now dropped to just 25%.

When customers come into the showroom today, they’re better informed, they know what they want to purchase, and they’re up on various the options and pricing deals.  In short, they’re ready to buy.

Fewer intrusive ads … better educated consumers … less stress on sales personnel … satisfied buyers.  It seems like a win-win for everyone, doesn’t it?