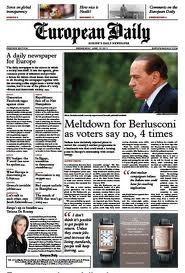 Over the past decade or more, seemingly all the business trends on the newspaper front have been negative. So to read that a new transnational newspaper is being planned for a Fall 2012 launch comes as a pretty big surprise.

Yes, you heard that right:  The European Daily plans to hit the streets in a few months’ time. In the meantime, the budding newspaper already has a website up and running.

The European Daily is the brainchild of three young entrepreneurs from Sweden and Germany. “We are a publication that partly targets a more senior audience who, to a great extent, still prefers print, as well as a traveling audience who wants to read their news on a flight or at their hotel,” says Johan Malmsten, one of the three founders.

Does this sort of thinking sound like a recipe for success in 2012?

At first blush, it seems like a pipe dream. Two huge roadblocks appear to be standing in the way of success. First, the market dynamics have been ugly for traditional newspapers … their traditional business model swept away by the Internet and changing ways that consumers access the news.

Add to this the mounting political and economic crisis in Europe, which could result in the European Union’s breakup, rather than any sort of renewed consolidation.  Is this the right time to be introducing a media property that’s “pan-European” in its character?

Mr. Malmsten discounts these threats. Instead he asserts, “Some people have praised us on our perfect timing, given the vivid current debate about Europe and the fact that a European news source and a common public sphere have never been as much in demand.”

“Europe is a daily reality for millions of Europeans, and that won’t change. We see giving these people a news source and a daily point of reference as our mission,” he adds.

Looking at the newspaper’s launch plans, it’s pretty clear the investors are fully committed to their mission. A staff of 30 is being constructed for the paper — about half of them focused on content.  The editorial team will be based in Amsterdam in Holland.

A “preview” edition of the European Daily was printed last year and ~40,000 copies were distributed in key urban centers like Paris, London, Berlin and Brussels. Reportedly, the reception was highly positive.

But I have doubts whether a completely new newspaper title can be launched successfully – especially one that’s based on a conventional print-centric product with a digital adjunct. It seems like we’ve seen this movie before:  This very formula has been tried and found wanting – even among established newspaper brands.

It will be interesting to look back in about two or three years and see if this endeavor adds up to much – or instead has gone by the wayside.

Anyone care to weigh in with odds on the front end?

I wonder how many marketers are focused on what’s happening in Europe on the digital marketing front? While companies here are busily engaged in making sure ad tracking is being done to the nth degree, in the UK and Continental Europe, new legal restrictions on advertising tracking threaten to upend a lot of these efforts, particularly for multinational brands.

In short, the EU’s e-Privacy Directive restricts the use of “cookies” and virtually all other digital ad tracking methods. And the legal frameworks set up around this directive would require any marketer with users in any EU country to be subject to EU-wide and country-specific privacy legislation.

The new privacy initiatives are far more restrictive than the present US-EU “safe harbor” agreement, which merely requires American companies to notify users when cookies are used on a website. The new regs covering web pages, web apps and mobile apps would require giving notice each time a cookie is used, thereby setting up a flurry of endless notifications that promises to seriously degrade the online browsing experience.

The seemingly reasonable compromise of adding information to a “terms of use” agreement isn’t acceptable to the EU either, unless all users are issued the new agreement and they certify their acceptance.

And just to make sure everyone knows how serious all of this is, the new regs call for the imposition of financial and/or criminal penalties for the non-compliant use of cookies. But for the moment at least, only two relatively small countries besides the UK – Estonia and Denmark – have implemented controls to enforce the EU directives.

Here in the United States, privacy legislation slowly wends its way around Congress, with many legislators understanding that the key to successful commerce online is the ability for marketers to match marketing messages to interested consumers. It’s in Europe where governments appear more than willing to cripple the ability of marketers to do the job they’ve sought to do for decades: Target their audiences with as much precision as possible.

As a result, some European businesses are making noises about abandoning Europe for the United States. The problem is, in the digital age with so much of the branding and commerce blurred between countries, it’s impossible for restrictive moves in one region not to cause negative repercussions somewhere else.

This past month, Otto von Habsburg celebrated his 97th birthday. As the eldest son of the last emperor of the Austro-Hungarian Empire, he is a link with history – the heir apparent to one of Europe’s most powerful dynasties that ruled Central Europe for more than 650 years.

Otto’s life was borne amid conflict. He was just a small boy of four when his father Karl ascended the throne of Europe’s third largest country, right in the middle of the First World War – a conflict which was to bring about the collapse of the monarchy in 1918. Emperor Karl died just a few short years later, making Otto the titular head of the impoverished family, which was forced to live “on the run” in Switzerland and Spain.

Throughout his years of schooling, Otto was tutored in the fiendishly difficult Hungarian language. This was deemed important because Otto’s father had never relinquished his claim to the throne of Hungary — and because Hungary was still technically a monarchy, ruled as regent by Admiral Miklós Horthy, once supreme commander of the Austro-Hungarian navy.

But soon thereafter came the destruction of Second World War and the spread of communism throughout most of the lands of the old empire. At this point, it seemed almost inevitable that Otto would be destined to become “just another” ex-royal personage, whiling away his days in carefree locations like Monte-Carlo, St. Tropez or the Aegean Isles.

But here is where Otto played his hand differently – and in the process became an important player on the international stage and an advocate for a new European political order. Renouncing any claims to the throne, he became instead an indefatigable champion of European unity. An ardent anticommunist, Otto believed the key to Europe’s future was to strive for common interests and common ground. He stood for election to the European Parliament and was an early member of that body, eventually serving for 20 years.

He also became an important historian and lecturer, traveling the world and speaking with audiences everywhere. I remember hearing Otto von Habsburg give a speech at St. Catherine’s College in St. Paul, MN in 1972, when I was a student in high school. The predictions Otto made in that speech were uncanny in their accuracy. He forecast almost to the exact year the fall of communism (1990), and he also warned about Europe’s smoldering powder-keg (the breakup of Yugoslavia into squabbling mini-states).

And when the Iron Curtain finally did come down in the early 1990s, Otto offered up his services to the new post-communist governments in the land of his forefathers. Subsequently, he played a significant role as a kind of unofficial cultural and social ambassador for several countries, most notably Slovenia, Croatia and Hungary. The prestige of the Habsburg name and its ties to a proud history provided added “cachet” to the early efforts of the post-communist governments to establish meaningful economic and business ties with the West. (Otto’s fluency in the Hungarian language, thanks to all the many hours of tutoring when he was a boy, turned out to be quite handy in a wholly unexpected yet very welcome way.)

Today, at age 97, Otto von Habsburg is still very much with us. He has slowed down a bit, but still shuttles regularly between his home in Bavaria and “his” cities of Budapest, Vienna and Zagreb. From the vantage point of history – where we can now see how the “brave new world” of the 20th Century brought forth more than its share of human misery along with all of the political innovation – the virtues of the “old order” have become easier to recognize.

Certainly, that is the case in the lands of the old Austro-Hungarian Empire, where Otto, “the man who would be king,” has not only been declared an official citizen of several countries, but is also respected by people all across the political spectrum. In the end, not a bad legacy at all.

So here’s a hearty toast to Otto von Habsburg: 97 years young and a true citizen of the world.