Skip to content
HomePosts tagged 'Blight'
One of the sadder stories to hit the television airwaves in recent days concerns Marabel Chanin, an elderly woman living alone in an urban “ghost” neighborhood. When Marabel, a single woman, moved to Detroit’s North End back in 1964, the area, adjacent the Palmer Park Golf Course, was a beautiful, established Detroit neighborhood graced by roomy, circa 1920s single-family homes and lush landscaping.

Moving forward some 45 years later, Marabel was the last person on her block of Robinwood Avenue, living in daily (and nightly) fear of break-ins, gunfire, or worse. Complaints to police went nowhere, so her phone call to the local Detroit Fox News affiliate TV station (WJBK’s Problem Solvers) was a last-ditch attempt to find a solution to her dilemma.

Marabel’s story, profiled by the station last summer, brought the issues of crime & grime, urban decay and danger down to the most personal level and struck a nerve with viewers across the Detroit viewing area. The story ended up on the Internet, where I viewed the news clip on YouTube while researching my blog entry on the city of Detroit’s decline. It was so moving, I felt compelled to contact WJBK-TV, hoping to hear a good end to the story.

Unfortunately, as was chronicled in a follow-up report by the station broadcast last week, there was no good end. In fact, Marabel passed away in her home right around Christmas and was discovered days later. And now, five months on, her body remains at the county morgue, claimed by no one. Because of severe budget shortfalls, there are no funds to bury her or the nearly 100 other unclaimed bodies that are being kept there.

A story like this is gripping enough on a purely personal level … but it is also powerful in a larger context. To what degree does someone like Ms. Chanin — a single person of middle-class means but without close relatives — bear the blame for allowing herself to become the last person living on her city block in a trashed neighborhood? Or are there also larger forces at work that overwhelm the ability of someone of modest means (and elderly as well) to figure out a solution and act on it?

It was the southern agrarian writer Andrew Lytle who wrote in an essay years ago about the potentially dehumanizing effects of urban living. Lytle believed people were meant to live in smaller communities, where folks know each other and look out for neighbors in need. He also warned against large-scale industrialization, arguing that economic downturns lead to massive unemployment and thus dislocation of workers, whereas people who work the land usually can get by in a bad economy.

Of course, Lytle did not anticipate the advent of “industrialized agriculture” and the effect that would have on small farmers. But when you consider the economic landscape in 2009 and its effects not only on Detroit but also communities like Elkhart, IN, Lytle’s essay suddently takes on a very contemporary significance.

And what of Marabel Chanin? WJBK-TV has established a fund to provide a burial ceremony for her — and to do the same with some of the others unclaimed at the morgue. Tax-deductible donations to the “Marabel Chanin & Friends” fund are being accepted c/o National City Bank/PNC (First National Bank Building, 660 Woodward Avenue, Detroit, MI 48226). Reportedly, community response has been strong. 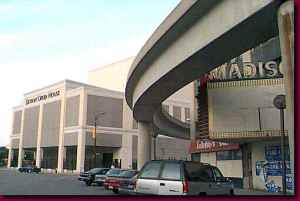 On a trip to Detroit a few days ago, my family and I stayed downtown in one of the city’s newly renovated grande dame hotels. The 1920s-era Fort Shelby Hotel, now part of the Doubletree chain, reopened last December after being closed for more than 25 years. It’s a jewel of a property stuck in the middle of one of the most depressed cities in America. Reportedly, a whopping $80 million was spent on its renovation.

The timing couldn’t have been worse. Just up the street is the even more palatial Westin Book-Cadillac, which was the world’s largest hotel when it first opened in 1924. It, too, stood vacant starting in the early 1980s, miraculously avoiding the wrecking ball before being rescued in a $200 million+ renovation and reopening this past October.

So what will help fill the rooms of these showcase hotel properties? If a flood of reservations actually materializes, it will be for the myriad lawyers, accountants and government officials descending on the city to pick apart General Motors and Chrysler Corporation.

The city of Detroit can’t seem to catch a break. First, there’s the real estate crisis that has seen property values plunge even faster than the national average. Today, the city’s median home sales price is below $10,000, which has to be the record low for a major U.S. city.

Next up, the spectacle of dilapidated infrastructure, a dysfunctional school system plus governmental corruption, nepotism and favoritism run amok – all culminating in Detroit’s mayor being sent to prison.

Now comes the implosion of Detroit’s auto industry that has sparked the nation’s renewed attention on the crumbling city, including human-interest television reporting and lurid photo essays like the one just published in Time magazine.

Sadly, this is Detroit. Riding the People Mover, the 2.5-mile monorail system that loops the perimeter of downtown, one can peer into the second-story levels of building after vacant building. It’s truly a metaphor for the entire city … and a peepshow for the rest of the nation.

Is there a natural bottom? The investors in Detroit’s old hotels seem to think so. But you have to wonder, would those investors have moved forward with these initiatives knowing what they know today?

It was photographer and social commentator Camilo Jose Vergara who suggested more than ten years ago that the empty skyscrapers of downtown Detroit be preserved in their current state as a memorial and monument to a vanishing industrial age. Of course, the city government leaders were horrified at the idea and objected loudly. But really, what other use could they possibly come up with for these relics – silent and stark reminders that a city once the nation’s fifth largest has shrunk in under 50 years to less than half its former size.