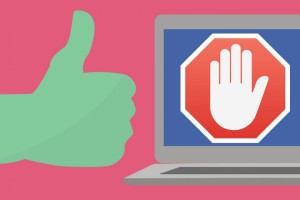 The ad blocking phenomenon on the Internet shows no signs of abating.

Underscoring this, marketing research and forecasting firm eMarketer has just published its most recent ad blocking stats and forecasts for the United States. It projects that ad blocking adoption will continue to rise by a double digit rate in 2016 to reach nearly 70 million users.

If those projections turn out to be accurate, it will mean that ad blocking will now be used by more than 26% of all Internet users in the United States, up from ~20% just a year earlier.

And for 2017? Those forecasts are looking a whole lot like this year, too; eMarketer forecasts that ad blocker adoption will grow to more than 86 million users by the end of 2017.

[For the record, eMarketer defines a user as an Internet user of any age who accesses the ‘net at least once per month via a desktop or laptop computer, tablet, smartphone or other mobile device that has an ad blocker enabled.] 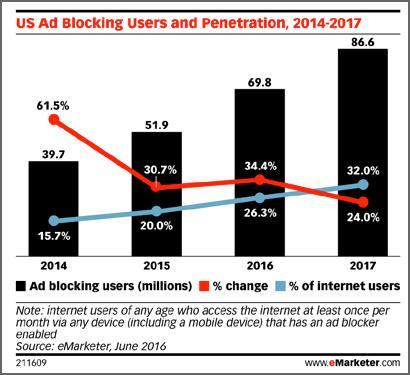 According to the eMarketer analysis, the incidence of ad blocking is substantially more common on desktops and laptops; ~63 million people will use an ad blocker on these types of devices this year compared to ~21 million who will do so on a smartphone.

One reason for this is that ad blockers typically don’t work on apps, which is where mobile users spend much of their time. Moreover, some of the most irritating aspects of desktop/laptops advertising, such as ads with video and sound, are the kinds of advertising less likely to be served on mobile devices.

eMarketer expects many more people to begin installing ad blockers on their smartphones, however — to the tune of an increase of over 60% this year.

These projections must be alarming to publishers and advertisers. Paul Verna, a senior analyst at eMarketer, notes this:

“They’re seeing immediate revenue losses and [they] would be remiss to downplay what amounts to a large-scale rejection of their main monetization model.”

Separately, an analysis by Juniper Research sees more than $27 billion in advertising revenues lost over the next five years as a result of ad blockers.

Of course, that’s a far cry from the estimated ~$160 billion that digital advertising represents today.  But significant nonetheless.

As if on cue, The New York Times has just announced that it will introduce an ad-free subscription option. Reportedly, the publication will begin to offer subscriptions that cost more than a regular digital subscription, along with giving subscribers the option of opting out of seeing advertising if they wish to do so.

At present, NYT subscribers who use ad blockers are technically violating the publisher’s Terms of Use agreement — although I seriously doubt many people have had their knuckles rapped for doing so.

For now, all the Times does is kindly request that users “white-list” the NYT site so that the ads will appear even though an ad blocker has been installed.  According to news reports, about 40% of the people notified have actually done so.

Presumably, the new subscription option is targeted at people who really do wish to avoid seeing online advertising — and are willing to pay a premium for the benefit.

One wonders how much of a dollar premium subscribers will be asked to shell out for the privilege of keeping their screens from being inundated with advertising. (At present, annual NYT digital subscriptions range from ~$140 to ~$200.)  Will users balk at the higher rates?

Clearly, we’re in the middle of this movie … and it’ll be some time before we see how things shake out in the online media advertising game.  What are your thoughts about spending more for an ad-free subscription … and do you even have any online pay subscriptions at all?  (Many of my friends and business colleagues don’t.)