Skip to content
HomeIs there an emerging crisis in caregiving? 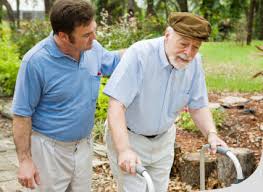 It surprised me to learn recently that nearly 45 million American adults are providing unpaid care to family members. And in nearly 80% of the cases, the persons being cared for are over the age of 50.

As it turns out, there are tens of millions of parents and spouses who require daily care.  And for many of folks who take on the role of unpaid caregivers, these tasks are like a second job for them.

Typically, they require a minimum of 20 hours per week (and often far more than that).

Juggling work and life under such circumstances is more than merely an inconvenience. It can also put caregivers’ own health and emotional well-being at risk – not to mention the added financial burdens where all the little extra expenses can add up to be quite a lot.

AARP is asking the question: Is there a coming crisis in senior care?  Looking at this chart, there very may well be one looming on the horizon:

What this chart tells us is that in 2010, the ratio of caregivers to care recipients was about 7:1.  In just 20 years, that ratio will be down to 4:1.  And it’s going to get even worse after that.

It comes down to simple math. The population of Americans over the age of 80 is expected to grow by nearly 45% between 2030 and 2040, whereas the number of available caregivers won’t even begin to keep up (rising by just 10%).

And then there’s looking at the role of caregiving from the other side. As it turns out, there are nearly 8 million children who live in families where a grandparent is the head of household.

The reasons for “grand-families” are varied: military deployment of parents, incarceration, substance abuse or mental illness.  And where these families are found crosses all societal lines.

When you look at it from all the angles, caregiving is a big challenge with no easy answers.  But considering its ubiquity, it’s an issue that doesn’t get the kind of attention it probably should.

If you have personal observations to share based on your own family’s caregiving experiences, I’m sure other readers will find them worth hearing — so jot them down in the comment section below.

One thought on “Is there an emerging crisis in caregiving?”