Skip to content
HomeGoogle businesses: One big star and a bunch of perpetual understudies?

Alphabet or no Alphabet, when it comes to anything beyond its core search and display advertising business, Google’s performance is pretty ‘meh.’

Here’s an interesting news byte: Morgan Stanley estimates that Google has lost between $8 billion and $9 billion on its so-called “side projects.”

So reported the Barron’s blog this past week.

It’s the strongest signal yet that Google’s vaunted business model is spectacularly successful for its core business … but that it’s as ineffective as most other companies when it comes to building the next silver-bullet product or service.

Even Google’s YouTube business unit is likely only a break-even proposition, despite years of concentrated attention, enhancements and tweaking. According to Morgan Stanley’s Brian Nowak:

“We estimate YouTube runs at a 0% profit margin … YouTube’s profitability could [actually] be lower than we estimate, but since it likely varies significantly from quarter to quarter, and until we have more visibility into the business, we believe break-even is a safe assumption.”

It’s likely we wouldn’t have even these clues were it not for the recently announced creation of Alphabet, a new umbrella structure for Google’s various business segments:  search, which is an estimated 96%+ of its business volume, and then everything else.

This development is providing more “transparency” that enables investment houses like Morgan Stanley to come up with back-of-the-napkin rough figures like this: 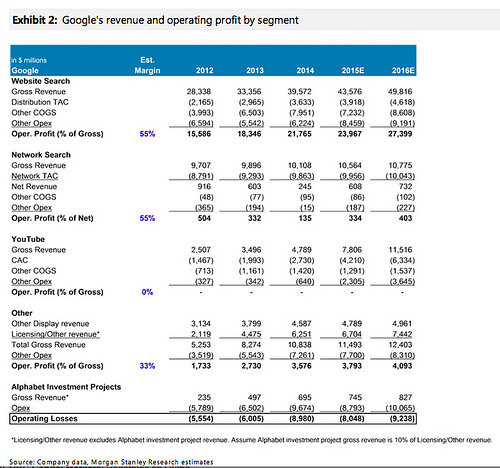 As time goes on, it will be interesting to see if Alphabet can demonstrate that the corporation is more than a one-trick pony.

Regardless of that outcome, the way that Google has cornered a ginormous $60 billion+ chunk of the advertising business is amazing – and laudable. Fair dues on that.

One thought on “Google businesses: One big star and a bunch of perpetual understudies?”