Pollsters like to point out that people will sometimes voice an opinion about an activity, a product or a political candidate — but what they say doesn’t match the reality.

If that’s the case, it makes the recent revelation that ~42% of ~500 Austrians surveyed in a Market Institut poll believe that Adolf Hitler’s rule “wasn’t all bad” even more scary than it sounds at first blush.

Bringing things back closer to home, a report issued in August 2012 by the National Center for Education Statistics states that ~96% of female high school seniors want to go to college … and that among male seniors, it’s only a tad lower at ~90%.

But here’s the actual reality: The U.S. Census Bureau reports that fewer than 60% of 18-24 year olds are actually enrolled in college or have earned their higher education degree.

Why aren’t kids going to college even though the vast majority of high school seniors say they want to attend? There are the predictable reasons:

But perhaps we’re beginning to see bit of a shift in thinking, too.

Most parents – and many school systems as well – hold up college prep as the primary objective of high school curricula and learning-related activities. But some may be looking at the less-than-lucrative job prospects of graduating college seniors and realizing that the traditional four-year college course of study isn’t the clear ticket to a gainful career that it once was.

In fact, fewer than 50% of males are enrolling in four-year educational institutions following high school, while for females, it’s closer to 75%.

It’ll be interesting to see how all of this plays out over the coming decade.  Perhaps then we’ll have the benefit of 20/20 hindsight to see if these trends were a potent of bad things society … or not. 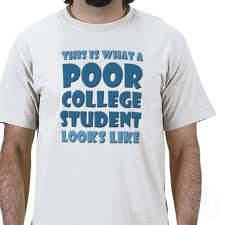 I’ve blogged before about the increasing concerns many people have regarding the quality of college education in America. Now, several new data points should make every parent of college-age kids – or children who will be ready for college soon – take additional notice.

The first interesting news tidbit is that total student debt, which surpassed the country’s credit card debt for the first time in August 2010, now tops $1 trillion. Compare that to student debt being only around $200 billion as late as 2000.

So we’re talking an increase of ~400% in a little over a decade, which is miles more than the inflation rate over this period. Average debt now stands at almost $23,000 per student, which is a spike of ~8% over the past year alone.

And just what are students getting for all the money they’re spending (or borrowing) for their higher education? If you want to know the ugly truth, check out the recently published book Academically Adrift by sociologists Josipa Roksa and Richard Arum [ISBN-13: 978-0226028569 … also available in a Kindle edition].

Based on the information presented in this book, some grads might wish to haul their colleges up on charges of educational malpractice. Full-time instructional faculty has declined from 78% of college teachers in 1970 to only around 50% today.

Roksa and Arum also report that college faculty members spend, on average, just 11 hours per week on instructional preparation and delivery … the rest of their time is spent on research and a slew of administrative activities.

And how about the “quality” of the education that’s being delivered? If we wish to view that in terms of the amount of time students are spending on their studies, the stats aren’t trending in the right direction. The book claims that whereas the typical college student in the early 1960s devoted an average of 40 hours each week to academic work, today’s students now spend only about 27 hours per week on studies. So in what way is the substantial extra money being extracted from students being used to delier a better quality product?

Here’s the next shocker: ~85% of college graduates are moving back home following graduation. This information comes from a 2011 field survey conducted by Philadelphia-based market research firm Twentysomething, Inc. Compared to the firm’s prior surveys, that represents a spike of nearly 20 percentage points in only five years.

Of course, we all know the economy has been a major problem over the past few years, with jobs hard to come by even for seasoned workers. But to learn that fewer than one in six college students are moving out on their own following college graduation means that precious few grads are coming out of school with the ability to land jobs that can sustain an independent lifestyle — however modest.

With stats as dismal as these, is it any wonder why some people are seeking an alternative paradigm for higher education other than the “four years away from home” model? Enrollment figures at America’s community colleges have been skyrocketing. Online education is also booming, despite lingering concerns about learning standards and accreditation.

Some economists such as Richard Vedder are suggesting making radical reforms in the way that financial aid is provided – and to whom – while other observers are pushing for more recognition of learning credentials that take us beyond a BS or BA degree.

Many of these ideas strike at the very heart of what we’ve always been conditioned to believe about a four-year college education as the gateway to a better life. But with today’s reality being so far removed from the theory (fantasy?) … some out-of-the-box ideas and approaches are exactly what are needed now.

Like Loading...
The digital revolution is having its first and greatest impact on the younger generations. Whether it’s mobile apps, hyper-texting, online gaming, or keeping up on the news without the benefit of the daily paper, they’re the ones most on the cutting edge.

So it might be somewhat surprising to read the results of a survey of college kids about how they prefer to access their textbook information. I’ve blogged before about the racket that is college textbook publishing – a rip-off if ever there was one. So one would think that college students (and their parents if they foot the bill) would be very keen on any advancements that begin to render expensive textbooks obsolete.

But according to a survey conducted in mid-2010 by OnCampus Research, a division of the National Association of College Stores, only 13% of college students had purchased an electronic book of any kind during the previous semester.

And of that percentage, ~56% revealed that the prime mover of their e-book purchase was because it was required course material for class, not because they chose an available e-version over a printed version of the textbook.

What’s more, nearly three-fourths of the students in this survey stated that they prefer printed textbooks over digital versions.

And when it comes to what devices people are using to view their e-books, most are accessing the contents on laptop computers rather than newer devices that have hit the streets in recent times:

Laura Cozart, a manager at OnCampus Research, had this to say about the survey results: “The findings of the report are not surprising. Every new innovation takes time before the mainstream population embraces it.”

Reflecting the current situation, of the NACS member stores that offer digital content, e-books comprise only ~3% of course material sales. But NACS is expecting that percentage to rise to 10% or 15% by 2012.

But the impetus behind that anticipated increase is expected to come from faculty members as they get more familiar and comfortable with the interactive possibilities to enhance their classroom instruction — rather than from those oh-so 21st Century students.

It wouldn’t be the first time the “leading edge” meets the “back edge” going around the other side.