Social influence/reputation scores – what no one really wants – come back for Round 2.

Who remembers Klout anymore?  When the social media “influence rater” was quietly shuttered in mid-2018,

Klout was just a faint glimmer of what it had once been.  Over a 10-year arc, the social influence “Klout Score” went from being something some people cared about to being something no one bothered with.

Through some rather opaque algorithms, Klout purported to measure the reach and influence of people’s social networks and correlate the content they created to measure how others interacted with that content.

Klout used major social media platforms including Facebook, Instagram, Twitter, YouTube, Wikipedia and LinkedIn (plus a few less important ones like Foursquare and Google+, but not SnapChat or Pinterest) to create a person’s so-called “Klout Score” ranging from 0 to 100.  The higher the score, the more “social clout” the person presumably had.

The resulting score was something that many people discounted, noting that prolific bloggers ended up having Klout Scores significantly higher than even the president of the United States.

Others looked at their own modest Klout Scores and freaked out.

But as it turned out, all of it was “much ado about nothing” — so much blue smoke and mirrors.  MediaPost columnist Kaila Colbin put her finger on the reality of it all when she wrote this about the foundation upon which Klout was built:

[The idea that] “the carrot, the reward, is the influence you have — that is backwards. Influence is not a reward or an end-result.  It is a byproduct of actually being good …”

“A service like Klout promotes the ambition of being influential, but there are no shortcuts. Show up. Express yourself wholeheartedly. Deliver value. Ask yourself what you can give your community. The influence will take care of itself.”

As if on cue, starting about halfway into its decade-long life, Klout began to show significant cracks in its foundation. Klout’s presence began to weaken as more people raised questions about the company’s well-guarded methodology by which its scores were determined.

Still others began to label the scheme “socially evil” in that Klout was in the business of exploiting the “status anxiety” of the people who paid attention to the scores.

But perhaps the biggest knock came when search engine specialist Sean Golliher analyzed the Klout scores of Twitter users and discovered that the number of Twitter followers was sufficient to explain 95% of the Klout scores assigned to those users. That finding validated the suspicions many had about Klout all along that its rating system was an elaborate architecture based on very little at all.

The last few years of Klout played out like so many other high-flying wonders of the cyberworld:  A change of ownership that failed to stem the negative trends, followed by mounting irrelevance and finally closing down the entire enterprise.

At the time Klout was shuttered in May 2018, few even noticed. Indeed, for many Internet users it was as if Klout had never existed. 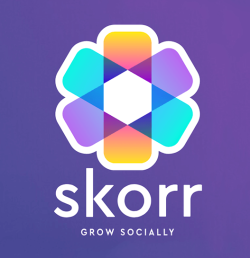 But cyberspace being what it is, no sooner had Klout disappeared than a new social influence/reputation protocol emerged to take its place.

This time it’s Skorr, sporting the high-minded tagline “grow socially” and described by its backers as follows:

Over on the company’s website, we read that not only will Skorr allow people to measure their influence, it “will also allow you to challenge your friends on different social contests and invite them to social media disputes.”

Let’s hope that this new influence/reputation “protocol” will go the way of the last one — and that it happens a whole lot quicker this time around.

It had to happen: The combination of social media measurement capabilities and ego gratification has brought forth attempts to “quantify” a person’s influence level in social media.

One of the better-known of these endeavors is run by Klout, a San Francisco-based entity launched in September 2009 that applies social media analytics to measure people’s influence across their social network.

Underscoring the company’s sense of self-importance is its proclaimed tagline/slogan:  “The Standard for Influence.”

Klout purportedly accomplishes this by analyzing data mined from Twitter, Facebook and other social sites – information such as the size of a person’s network, the content created, and how others interact with that content.

Klout profiles built from these bits of information include a “score” ranging from 1 to 100 – the higher a score representing a higher assessment of the breadth and depth of a person’s online influence.

Reportedly, more than 100 million of such profiles have been built by Klout over the past two years. And how is Klout building these scores? It’s using Twitter data points such as:

Somehow, it doesn’t seem surprising at all that Klout’s rating and ranking activities have come under attack. And the criticism is not just coming from people who are questioning the methodology behind the analysis and rating. Some social critics contend that scoring devalues authentic online communication.

Movie critic, writer and novelist John Scalzi has written that Klout’s very premise is “socially evil” in that it exploits the “status anxiety” of social media participants. Charles Stross, a tech writer and sci-fi author, goes even further: He labels Klout “the Internet equivalent of herpes.”

But perhaps the most biting criticism comes in the form of satire, courtesy of Tom Scott, a freelamce web developer and humorist who has launched “Klouchebag.”

What’s Klouchebag? According to Scott, it measures “how much of an asshat you are on Twitter.”

In the same fashion as Klout, Klouchebag establishes a rating score. But this one is based on the ARSE rating system, an eyebrow-raising acronym that stands for:

For Tom Scott, Klouchebag satirizes what he considers to be a “pseudo-scientific” effort to create a social media hierarchy. He hopes its emergence will contribute to a backlash against Klout and other similar ventures.

When it comes to Klout, Scott is merciless: “I’d been annoyed with the idea of Klout for a while … [which] is one of the worst ideas ever put online. Klout annoys me for the same reason that search engine optimization annoys me: It’s an enormous amount of effort designed to game an arbitrary and often-changing system. Imagine if all that time went into actually making interesting things, or caring about the people around you.”

Maybe Tom Scott has forgotten a thing or two about human nature: People are often smitten by vanity and pride – and the desire for fame. It’s been that way ever since the dawn of time. Why should we expect anything different from people today?

[One can only imagine what Andy Warhol would have said about people and their “15 minutes of fame” had he lived in our era of social media!]