Well, that didn’t take long:  Now that Google Glass devices have started to be worn by more than just the first few early adopters, a new facial recognition app has promptly been developed.

It’s an app that enables users to snap a photo of someone, and then search the Internet for more information about the image – essentially, to identify the person by name.

Of course, Google has always maintained that such activities are an inappropriate use of Google Glass devices.  But that hasn’t stopped an outside app developer from doing just that.

The app is called NameTag, and it was introduced in late 2013 by a developer group known as FacialNetwork.  In December, the developer uploaded a video showing how NameTag works.  You can view it on YouTube here — and note that it’s quite controversial with more “dislikes” than “likes” from voters; how often does that happen?

Basically, the Google Glass wearer snaps a picture and the app runs the photo through a database containing ~2.5 million facial images.  If a match is found, it returns that finding along with the name and profile associated with the facial match (e.g., occupation, personal interests and relationship status).

According to the developers, NameTag can detect an image match even from behind obstructions like glasses and a hat.

What does FacialNetwork see as the benefit of its new NameTag app?  The developer touts the potential for dating and relationship-building.  On its website, the following scenario is presented:

“Jane has lots of different social media profiles and loves to meet new people.  By using NameTag, she can link all her social networks to her face and share her information, and meet new people in an instant.” 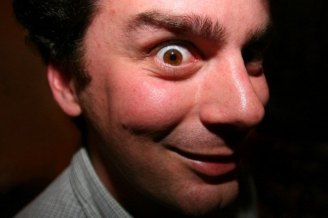 As if pre-anticipating all of the hackles, NameTag quickly goes on to explain that people can choose whether to have their name and profile information displayed to others.

As entrepreneur and NameTag’s co-creator Kevin Tussy notes, “It’s not about invading anyone’s privacy; it’s about connecting people that [sic] want to be connected … We will even allow users to have one profile that is seen during business hours, and another that is only seen in social situations.”

If all of this sounds like it’ll be a tad more difficult to carry out in real life than it sounds like in theory – that you’re not fully comfortable “assuming” an app like this will actually offer the proper degree of safeguarding – I’m sure you’re not alone in your concerns.

In fact, some people aren’t waiting around to see what “might” happen, but are moving now to take preemptive action.  Certain congresspeople are in on the action.  And consumer advocacy group Public Citizen notes that Google Glass users in certain states could potentially face criminal prosecution in addition to civil penalties for recording people without their knowledge or consent.

Up to now, no one has faced such legal action – but that could be because the technology remains so new that few people are actually using Google Glass devices at this point.

The question is this:  Are people giving their “implicit consent” to be recorded just by talking with someone who’s wearing the device?  (The devices are fairly distinctive looking, after all.)

The answer may lie in whether the person even knows what Google Glass devices are.  One person speaking to another automatically means they know they’re being recorded seems to assume too much – at least at this relatively early stage in the product adoption cycle.

Things remain murky at this point because we’re still in an emerging phase in the application of the technology.  But one thing that seems clear is that we haven’t yet seen the beginning of what promises to be an airing of “dueling rights” in this area of the law.

For those who may already be using Google Glass (I’m not one, by the way), here’s your chance to share your perspectives with other readers here.

One thought on “It had to happen: Google Glass begets facial recognition apps.”