In the drive to keep the onslaught of fake e-mail communications under control, DMARC’s checks on incoming e-mail is an important weapon in the Internet police’s bag of tricks.  A core weapon of cyber felons is impersonation, which is what catches most unwitting recipients unawares.

So … how is DMARC doing?

DMARC, which stands for Domain-based Message Authentication, Reporting and Conformance, is a procedure that checks on the veracity of the senders of e-mail. Nearly 80% of all inboxes – that’s almost 5.5 billion – conduct DMARC checks, and nearly 750,000 domains apply DMARC as well.

Ideally, DMARC is designed to satisfy the following requirements to ensure as few suspicious e-mails as possible make it to the inbox:

But the performance picture is actually rather muddy.

According to a new study by cyber-security firm Valimail, people are being served nearly 3.5 billion suspicious e-mails each day. That’s because DMARC’s success rate of ferreting out and quarantining the faux stuff runs only around 20%.  And while America has much better DMARC performance than other countries, the Unites States still accounts for nearly 40% of all suspicious e-mail that makes it through to inboxes due to the shear volume of e-mails involved.

In developing its findings, Valimail analyzed data from billions of authentication requests and nearly 20 million publicly accessible DMARC and SPF (Sender Policy Framework) records.  The Valimail findings also reveal that there’s a pretty big divergence in DMARC usage based on the type of entity. DMARC usage is highest within the U.S. federal government and large technology companies, where it exceeds 20% of penetration.  By contrast, it’s much lower in other commercial segments.

The commercial sector’s situation is mirrored in a survey of ~1,000 e-mail security and white-collar professionals conducted by GreatHorn, a cloud-native communication security platform, which found that nearly one in four respondents receive phishing or other malicious e-mails daily, and an additional ~25% receive them weekly.  These include impersonations, payload attacks, business services spoofing, wire transfer requests, W2 requests and attempts at credential theft.

The GreatHorn study contains this eyebrow-raising finding as well:  ~22% of the businesses surveyed have suffered a breach caused by malicious e-mail in the last quarter alone.  The report concludes:

“There is an alarming sense of complacency at enterprises at the same time that cybercriminals have increased the volume and sophistication of their e-mail attacks.”

Interestingly, in its study Valimail finds that the government has the highest DMARC enforcement success rate, followed by U.S. technology and healthcare firms (but those two sectors lag significantly behind). It may be one of the few examples we have of government performance outstripping private practitioners.

Either way, much work remains to be done in order to reduce faux e-mail significantly more.  We’ll have to see how things improve in the coming months and years.

That’s a small percentage — seemingly trivial.  But considering the volume of e-mail messages sent every day, it translates into nearly 6.4 billion e-mails sent every day that are “fake, faux and phony.”

Interestingly, the source of those fake e-mails is most often right here in the United States.  Not Russia or Ukraine.  Or Nigeria or Tajikistan.

In fact, no other country even comes close to the USA in the number of fraudulent e-mails.

The good news is that DMARC has made some pretty decent strides in recent times, with DMARC support now covering around 5 billion inboxes worldwide, up from less than 3 billion in 2015.

The federal government is the biggest user of DMARC, but nearly all U.S. tech companies and most Fortune 500 companies also participate.

Participation is one thing, but doing something about enforcement is another. At the moment, Valimail is finding that the enforcement failure rate is well above 70% — hardly an impressive track record.

The Valimail study findings came as the result of analyzing billions of e-mail message authentication requests, along with 3 million+ publicly accessible DMARC records. So, the findings are meaningful and provide good directional indications. 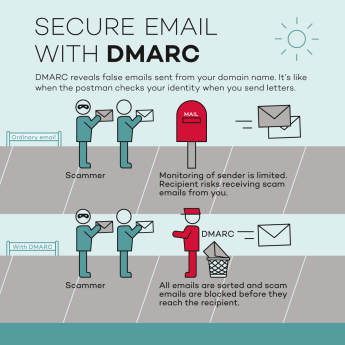 But what are the research implications? The findings underscore the degree to which name brands can be “hijacked” for nefarious purposes.

Additionally, there’s consumer fallout in that many people are increasingly skittish about opening any marketing-oriented e-mails at all, figuring that the risk of importing a virus outweighs any potential benefit from the marketing pitch.

That isn’t an over-abundance of caution, either, because 9 in 10 cyber attacks begin with a phishing e-mail.

It’s certainly enough to keep many people from opening the next e-mail that hits their inbox from a Penneys(?), DirecTV(?) or BestBuy(?).

How about you?  Are you now sending those e-mails straight to the trash as a matter of course?