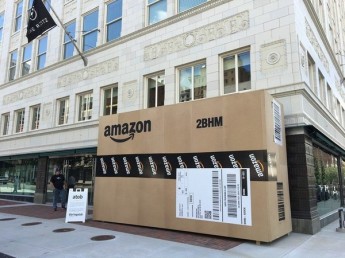 If you speak with small businesses that sell products online, many will tell you that they chafe under the strong-arm tactics of Amazon and its seller policies.

On the other hand, what’s their alternative?

The reality is that it takes about the same amount of time and effort to run a Walmart or eBay store as it does to run a store at Amazon.

The difference? The sales revenue of a Walmart or eBay store is typically less than 10% of what businesses would generate on Amazon for that same amount of work.  That interesting informational nugget comes from James Thompson, a partner at the Buy Box Experts e-tailing consultancy.

(And for small retailers attempting to run their own e-commerce sites, the revenue stream is even lower.)

But even with Amazon’s ascendancy in the world of online commerce, its retail platform remains a frustration to small sellers due to its level of responsiveness to questions and concerns (low) and its sudden, sometimes inexplicable policy changes.

Consumer advocates would counter-argue that Amazon’s seller policies are focused in the right place:  looking out for the end-user customer. But others contend that Amazon’s actions aren’t even-handed, nor applied equally.

Take Amazon’s policies on dealing with product shipments and defects. When a seller’s defect order rate goes as high as 1%, Amazon deactivates the vendor’s account automatically.  To be reinstated, a seller has to go through an arduous vetting process, during which time Amazon holds all monies due to the seller until every order is shipped and received – even orders that are in dispute.

To make matters even more onerous, the customer service phone number of the seller disappears, making it next-to-impossible for the vendor to clear up any misunderstandings with an end-customer other than by going through the Amazon portal.

Here’s another example:  Without prior notification, last month Amazon instituted a new “Pay by Invoice” policy that allows corporate customers a pay period of 30 days.

While this is a great move from the customer’s point of view, most small businesses are used to being paid in two weeks.  The new invoice payment policy squeezes the resources of smaller sellers, which often operate under tighter cashflow conditions than larger retailers.

It is true that bigger brands make up an increasing share of volume in the world of Amazon sellers. Those brands bring in the most money, but small businesses round out the portfolio and remain an important component of realizing Amazon’s aims of becoming the big behemoth with an “always and everywhere” presence in the world of retail.

Considering everything, it would seem that Amazon and its sellers should recognize each other’s worth and how much they mean to each other. Amidst everything, there has to be a win-win position that can be reached to the benefit of everyone.