Skip to content
HomeGenericide: The Biggest Threat to Trademarks 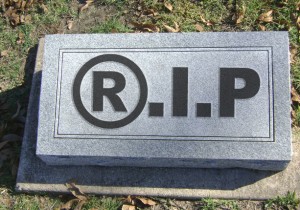 When reading articles or promotional copy about certain brands, the extensive use of footnotes plus “®” designations dangling off of words like ornaments on a tree look clunky and can be a real distraction.

But there are important reasons for companies to police and protect their brand equity … because if you spend some time snooping around the English language, you’ll find any number of words that began life as trademarked terms but became “genericized” over time.

Trademark lawyers refer to this progression as “genericide.”  And there are a surprising number of high-profile examples they can cite.

Recently, business writer and editor Mary Beth Quirk compiled a list of once-trademarked brand terms that have become victims of genericide, and she published her findings in the Consumerist, an e-zine put out by Consumer Reports.

Among the trade names she highlights that have “gone generic” are these:

Aspirin — Originally registered by German firm Bayer, aspirin’s trademark was confiscated by the U.S. government in the wake of World War I. Considering the massive headache Germany would unleash on the world barely 20 years later, perhaps this aggressive move wasn’t the best course of action!

Dry Ice — Believe it or not, this was actually a trademarked term, dating from 1925.  To nearly everyone, it sounds so much better than “solid CO2.”  The clearly preferred “dry ice” descriptor everyone uses is probably why the company lost its trademark by 1932.

Escalator — Registered in 1900 by Otis Elevator, the company lost its trademark when the U.S. Patent & Trademark Office determined that Otis had used it as a descriptive term — even in its own patent applications.

Heroin — This was yet another Bayer trademark.  It seems strange that heroin started out life as an actual branded product … but there we are.  Presumably, these days Bayer is happy that its company is no longer associated with such a problematic substance.

Laundromat — This term started out as a General Electric trademark back in 1940, issued for the first wall-mounted washing machine.  GE failed to renew its registration after the 1950s.

Linoleum — Here’s an example of a brand name that had already entered the generic lexicon before the manufacturing firm even attempted to register it.  Coined in the mid-1860s, the company’s efforts to register the flooring name were to fail just a decade later.

Thermos — This trademark was established in the early 1900s as a more pleasing way to describe a “vacuum flask.”  After too much loosey-goosey use of the term, the USPTO pronounced it genericized in 1963.

Trampoline — It appears that this term, coined by inventors George Nissen and Larry Griswold in 1936, was never officially registered.  The real generic descriptor is “rebound tumbler,” but “trampoline” sounds so much more effective to me.  Everyone else seemed to think so, too, leading to its ineligibility for trademark status.

ZIP Code — An acronym for “Zone Improvement System,” the ZIP code began life in the mid-1970s as a service mark of the U.S. Postal Service, but the registration was never renewed.  I guess the USPTO chose not to notify its sister agency of the renewal — not their business to do so even among friends and colleagues, evidently.

The next bit of interesting information in Quirk’s article is her listing of brand names that remain trademarked to this day — even though some of them seem to epitomize the essence of generic terminology.

Quirk concurs in the view that these terms may be on life support as proprietary names, noting that they are “trademarks who need to watch their backs” because of how pervasive they are in everyday language usage.  Among the terms she cites are these:

Thinking along these lines, do other trade names come to mind that could be in danger of losing their trademark status?  If you can think of any, please share your nominations with other readers here.

One thought on “Genericide: The Biggest Threat to Trademarks”