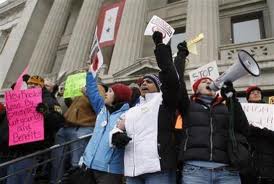 For years, it was a truism so well understood it could be etched in stone: A government job was one where the pay wasn’t all that great … but the benefits were wonderful and there was good job security.

The accepted tradeoff was between receiving lower salary compensation in the public sector in exchange for job security and good benefits. Lower reward, perhaps … but also lower risk.

Over the past decade, however, there’s a growing perception that this balance has shifted almost entirely in the direction of public sector workers. And now we have the data to prove it.

The CBO analysis found that the average salary for federal workers runs approximately 2% higher than similar jobs in the private sector. So the private sector salary premium seen historically no longer exists.

Benefits are another key factor. And in fact, the value of federal employee benefits now exceeds private sector programs by a whopping 48%. Taken together, total compensation for federal workers exceeds their like counterparts in the private sector by 16%.

But even with these stark statistics, we continue to hear complaints about the plight of public sector employees. To see how off-tone this sounds, compare the new CBO report with the continuing claims of the federal Office of Personnel Management that federal workers are underpaid by 26% compared to private sector positions.

That contention goes all the way back to the early 1990s, but it’s still quoted as if it’s Gospel truth some 20+ years later.

Really? Which one of these two studies do you believe more?

With the beating that companies in the private sector have had to take in order to remain competitive in a down economy – indeed, even to survive – the notion that federal workers’ average total compensation is lower than comparable private sector jobs doesn’t pass the snicker test.

And what about state and local public sector jobs? The studies may not be as comprehensive, but the evidence looks very much the same. Anecdotally, I know that every time salaries and benefit packages earned by public officials in my state and/or local jurisdictions are published, I hear howls of protest from people who feel that the compensation is way out of line with the rest of the market.

Public employee unions like to talk a lot about fairness. And at the end of the day, it is about fairness: In an economy where business has been battered, unemployment and underemployment continues to be rampant, and many employees who have managed to hold on to their jobs have had to endure big sacrifices in salary cuts, benefit cuts and increased co-pays … for public sector employees to expect the world to stand still for them and them alone seems anything but fair.

Consider the fact that a significant number of local governments – and even some states – are facing huge looming pension payouts and other financial obligations that threaten to bankrupt them. In such an environment, it’s unrealistic for public sector advocacy groups to think they can hold jurisdictions to 25-year-old commitments that were based on actuarial and tax revenue assumptions that are no longer valid.

A couple of maxims are in order: Times change. You can’t get blood out of a turnip. And yes, we can get ourselves out of this situation. But people are going to have to be flexible in their thinking for the effort to succeed.