Skip to content
HomeHappy Birthday to a Renaissance Man 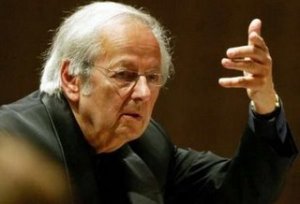 André Previn turned 80 years old earlier this month, which gives us cause to reflect on the incredible life of this highly interesting, very creative man. In his musical life, he’s demonstrated a versatility and catholicity that surpasses even Leonard Bernstein’s reputation.

Born in Germany, raised in the United States and truly a citizen of the world, Previn has lived out his life in the European capitals of London, Paris and Berlin … and here in the U.S. in places as diverse as Hollywood and Pittsburgh. A true wunderkind, he burst onto the musical scene back in the early 1950s, recording fine jazz piano arrangements that were released on 10” RCA Victor 78-r.p.m. and LP records … then soon migrated over to MGM Studios, writing musical scores for more than a dozen Hollywood films.

I own a few of Previn’s early jazz albums. His song arrangements are little gems – each one their own special musical adventure. Listen to his rendition of Stella by Starlight, for example, and you’ll immediately understand his special way with the music.

Previn’s pop music career masked the fact that he had studied classical music at the Paris Conservatory, and in San Francisco under the tutelage of the great French conductor Pierre Monteux. By the 1960s, Previn had moved from pop back to his classical roots, issuing a series of critically acclaimed recordings with the best symphony orchestras of London. His interpretations of the symphonies of Ralph Vaughan-Williams and Sir William Walton … along with recordings of the important British choral masterworks Belshazzar’s Feast and The Rio Grande remain touchstone performances, nearly 40 years on.

In his later years, in addition to guest-conducting the world over, Previn has penned a steady stream of memorable compositions, including several concertos for his ex-wife, the celebrated violinist Anne-Sophie Mutter. Even more impressive is Previn’s foray into the world of opera. His 1998 composition A Streetcar Named Desire has received more than 20 productions – an almost unheard of feat for a contemporary opera. And today, he’s busily at work writing a new work for the Houston Grand Opera to premiere next month, based on Noel Coward’s 1938 play Still Life (later made into the movie Brief Encounter).

At age 80, André Previn shows absolutely no sign of slowing down. And why should he? Musically speaking, he still has much to say … and the arts world is richer for it.