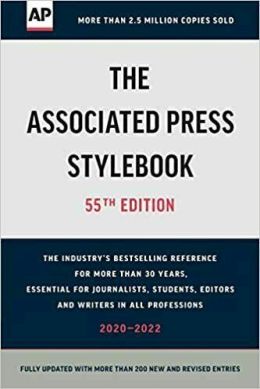 For many people – not just journalists but also business and tech writers – the Associated Press’ AP Stylebook is something of a Bible when it comes to adhering to proper presentation of the written English language.

There are other style guides out there – FranklinCovey is another popular resource – but the AP Stylebook has been the “go-to source” for so many decades, it’s hard not to think of it as the ultimate arbiter of what’s considered “proper” in written communications.

This vaunted reputation is why so many people take notice whenever new revisions to the AP Stylebook are released.  The most recent ones, published within the past few months – all 991 of them – are in some cases eyebrow-raising.

Reading through them, it appears that the Associated Press has gone all-in on “keeping up with changing times” by tackling a wide range of sometimes-provocative topics.  Here are some examples:

But the most extensive new guidelines in the updated AP Stylebook are the 11 paragraphs and 22 specific examples presented under the heading “gender-neutral language.”

“Freshman” is now also frowned upon – but at least the replacement term isn’t the awkward-sounding “freshperson,” but rather “first-year student.”

While AP is to be commended for attempting to keep current on cultural changes, let’s hope that its efforts don’t devolve into the level of parody; some may think that it already has.

But I do have one question:  When will AP finally acknowledge that the entire world is using U.S. Postal Service abbreviations for state names – and has been doing so for well-nigh decades now?

These days, it seems that nobody other than AP is writing “Ore.” for “OR,” to cite just one example among 50.  Tenaciously holding on to outmoded state abbreviations — when no one else is doing so — seems almost like a nervous tic on AP’s part.  (Or is “nervous tic” yet another descriptor we can no longer use?)

What are your thoughts about the newest AP Stylebook guidelines?  Right on the money … or blunt overkill?  Please share your views with other readers here.