Skip to content
HomeTitanic deck chairs – USPS edition: The Postal Service is getting into the clothing business. 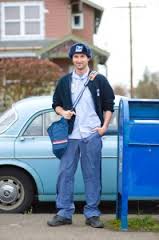 The U.S. Postal Service, hemorrhaging red ink all over the place, has finally decided to jettison Saturday mail delivery.

This decision was taken after years of (very public) hand-wringing and amidst dire predictions of public outrage if the trigger was actually pulled on eliminating Saturday delivery.

Yet, once the decision was finally announced, public response was … near silence. It was a total shrug.

[Politicians, take note: This may also turn out to be the public’s reaction to the sequester cuts kicking in — breathless predictions to the contrary aside.]

Of course, we all know the USPS hasn’t been able to catch a break in recent times. As mail volumes continue to slump, the postal service finds itself attempting to spread its fixed and operating costs over a steadily smaller share of mail volume.

According to the USPS’s own figures, there’s been a ~33% decline in catalogs mailed in just the past four years.  First class mailed hasn’t fared much better, decreasing by one-fourth over the past decade.

At worst, the situation is a recipe for complete failure … at best, the USPS will just continue to lurch from one mini-crisis to another.

So what to do with such dire prospects staring you in the face?

Why not start a clothing line!

That is correct: The USPS has announced plans to launch a new line of apparel and accessory items. It is partnering with Cleveland-based apparel company Wahconah Group to launch the product line, which will be sold under the brand moniker Rain Heat & Snow.

Forget trying to figure out mail delivery practices that will work in the 21st Century. According to the USPS’s corporate licensing manager, Steven Mills, “This agreement will put the Postal Service on the cutting edge of functional fashion!”

By “cutting edge,” Mills is apparently referring to the fact that the new clothing line will incorporate wearable electronics technology to make the items “smart.”

Isaac Crawford, CEO of Wahconah, reports that “the products will build on the rich American history of this iconic brand, creating specialized apparel for consumers, at affordable prices, delivering something new and exciting that retailers can offer their customers.”

Is anyone jumping up and down with excitement yet?

Tellingly, none of the Rain Heat & Snow apparel will be available at post office locations — only at department stores and apparel shops.

I guess it would be rather strange to encounter mannequins and display racks amongst the shipping containers, change-of-address forms and passport applications at your local post office branch.

As much as many people would like this new venture to be a success, I can’t visualize this endeavor causing anything more than a minor blip on an otherwise steady downward trajectory for the postal service.

So, is it back to the drawing board?

One thought on “Titanic deck chairs – USPS edition: The Postal Service is getting into the clothing business.”